Warping for Bead Weaving Without the Shedding Device

Warping for Bead Weaving Without the Shedding Device

Before you watch the following videos, please take a moment to look at our warping .pdf for warping for bead weaving without the shedding device.

Warping on a Mirrix Bead Pattern by Bev Hayes Berthoty (we just had to put this here!)

Plus, weaving beads is easy and fun!


What types of beading thread should be used?
Here at Mirrix Loom we love C-Lon D beading thread because it is specifically designed for use with beads. It doesn’t fray easily, it’s strong and it comes in many beautiful colors.


How do you know what warp coil to use?
Place the beads you plan on weaving on a needle and measure an inch. Then, count how many beads are in that inch. The number of beads minus one is the warp coil that will be used. For example, if you are using Delicas you would find 19 Delicas are in one inch, so you would use the 18 dent coil. There is some leeway in this, and depending on the beads you are using, it might not work out perfectly (numerically), just close. Using a smaller (lower number) coil is better than using a larger (higher number) coil.


Warping for Beadwork Without The Shedding Device Video:

Using The Bottom Spring Kit: (repeated from the warping for tapestry blog post)
The bottom spring kit is an add-on accessory that attaches to the bottom beam of your loom. This warp coil helps organize your warps at the bottom of the loom, just as your warps are organized at the top. It is great for wide bead weavings as well as small-scale tapestry. If you are using the bottom spring kit, warping is exactly the same except you place your warps in the bottom spring exactly how you do so on the top springs. Following are some pictures of looms with bottom spring kits to give you an idea of how the kit looks on a warped loom. 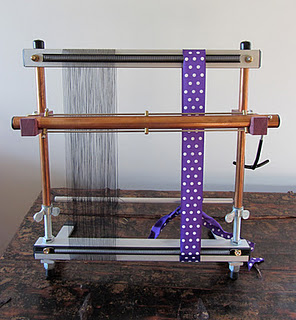