To do or not to do

To do or not to do

Saturday was a day of rest…well at least when it came to weaving. I had to take care of some chores, and we were also out till late (into sunday). I was too tired to do the usual early start.

I haven’t done any more on the bracelet as I don’t know what size is needed. I may be forced to guesstimate. Hmmm!…

So, Sunday I made a start on the fringe or the purse. This was after a lot of ‘research’ (read looking at eye candy) of fringes! I looked through some three books on looming that I have, and chose a style. I bought some Swarovski bicones last week to use in the fringe. I also went through my stash to make up the numbers. Now, yesterday evening I sat down to make a start. But then I had to choose the colours to use in the fringe. This took a while as I wanted to choose colours that would work with both sides. The fringe will be on both sides of the purse so they have to be matching. I’m not daring enough to try using different colours on each side!

So, I chose the colours and lay them out with some of the bicones. I made a start, held it up to admire and rapidly changed my mind. So, I was back to thinking about what to do again. In the end I went with my original idea, and here is how it is looking so far. 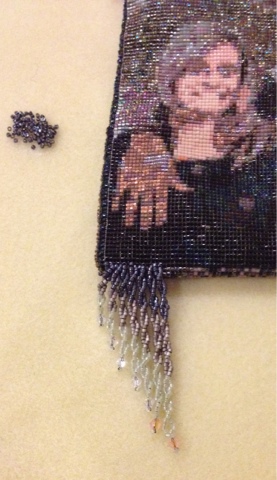 I’m thinking of changing it up a little, but hesitant. I’m not sure why. Partly because I don’t know if it would work, and I don’t want to undo and redo if that happens to be wrong.

My next project to go on the loom will be a portrait. I promised my husband a long time ago that I would make him a portrait of his (late) parents. 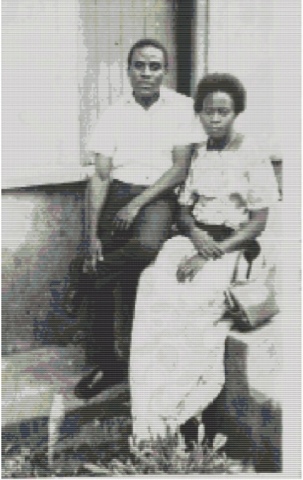 It’s been more than a year since i promised, so I think it’s about time I got on with it! I’m hoping to surprise him with it. It would mean I can’t work on it while he is home. He doesn’t look in the cupboard where I keep the loom so I wouldn’t worry too much about him seeing it. I need to order the remainder of the beads so I can start. I was considering fireline for the warps but think will just buy the large bobbin of white Nymo. That will do the job just as well.

So still quite a bit to do. I think I may try and do a video on warping for wide pieces. The portrait will be about 150 wide. Delicas of course. I I had planned and saved I could have done it in 15s! They’re a bit steeply priced but one of these days I will do a picture with them! Perhaps something with less colours 🙂

I’m off to decide how to continue this fringe. Happy reading and a good night when you get to bed!