In tatting, it is advised you hide the thread ends as you work, rather than wait till the end. In looming, the same can be applied. It doesn’t necessarily make it faster, but there is something laborious about weaving in those weft ends you’ve decided to leave till last!

Now, I always tell myself this time I’ll weave them in as I go along. Problem is I never follow through! I think with the next bracelet I will do just that. It’s only a few mins here and there, so makes no difference doing it during rather than after the looming. 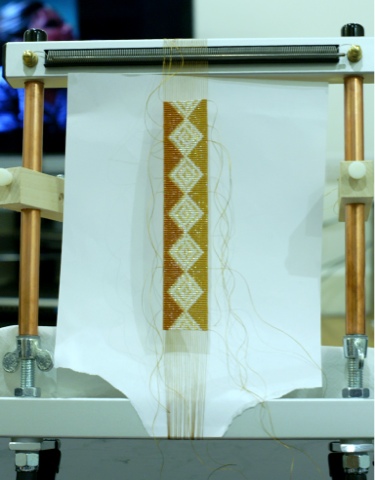 On that note, I had to weave in the weft ends of the bracelet that was on the loom. I settled on a simple brick stitch edging so that the pattern stays centre of attention. It’s odd how colours can really make a pattern. I did this previously in black and white. I think I prefer this colour scheme by a mile!

There was a bit of ‘pull & pray’. But not too many as I split some warps. Nonetheless at least i tried it. I think will definitely use that method at least once in future. Fireline may be a better thread to consider for warps in that case.

Today (read tonight), I managed to try the shedding device again, with just thread this time round. I was advised to try it with thread and the occasional line of beads. So far I’ve only used thread – DMC Perle. It’s nice and simple, quite relaxing actually 🙂 You just have to remember to have the ends at the back of the work, and to change the shed after each pass through.

I had to face my fear and do a video. It turned out to be about 10 minutes long, eek!! I’m hoping to upload it to YouTube tomorrow. Hopefully there’s something watchable in there lol!

Thanks for reading and enjoy the rest of your day. I’m off to bed to dream about looms – I seem to do that nowadays! 🙂