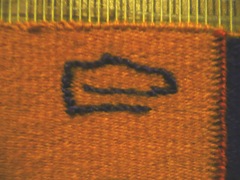 I’ve been thinking about the text and weaving. In looking at the soumak pseudo spiral above, this may be the best method of making text. Curves are much easier to obtain, and one might even get a cursive-type of writing. But I really wanted wider letters, so I tried the what’s shown below. Before deciding what to do next time, I will have to change the orientation of the letters before weaving. Then I will also probably try some blockier type of font, maybe something like this, without the little curlicues at the bottom of the t. 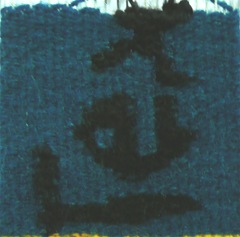 Imagine working for seven years on the same project! Now I know that Matisse was working on other projects at the same time, but gee, don’t you just finally say enough already? In the NY Times, there is an article about how the paintings of Matisse evolved over time—not the usual study from one painting to the next, but the study of one painting and how it changed to the final product. Of course, this type of reflection that brings change to a project is not possible for most of us weavers. How many looms with unfinished projects do we have room for? However, I’m sure we’ve all looked back at a finished work and thought how we’d do something differently. Maybe that’s what leads to a series. But is it something we’d do differently, or just an advancement on the original idea? 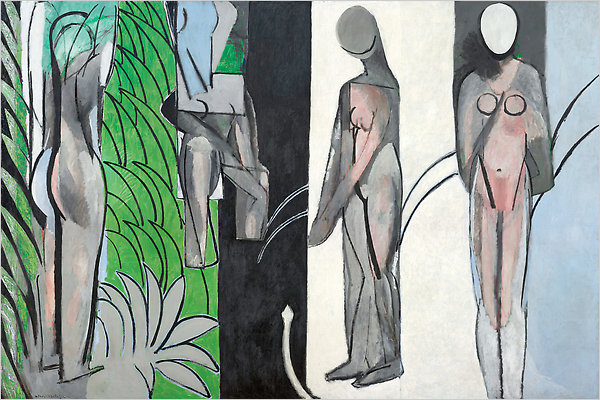 “Bathers by a River” went through a seven-year evolution as Henri Matisse continued to make changes, which can now be traced by curators using X-ray technology.

The following is a quote from the article about how this exhibit came about and the process of studying the various works.

The exhibition’s organizers, Mr. Elderfield and Stephanie d’Alessandro, the curator of modern art at the Art Institute of Chicago, where the exhibit was first shown, focused on 26 paintings, drawings and sculptures, which they examined with new digital imaging techniques, laser scanning, ultraviolet illumination and up-to-date computer software. They also tested paint samples and studied fresh material unearthed from the artist’s family archives in Issy-les-Moulineaux, a Paris suburb.