I am going to start with a picture of one tired cat. 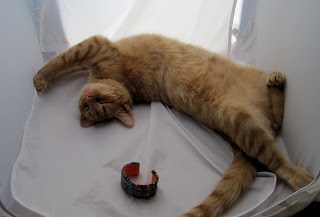 As well he should be.  In the wee hours of the morning I went into the kitchen to retrieve a glass of water and noticed that the house was really cold.  Then I noticed that the front door was wide open.  And then I realized that would mean one orange cat was not in the house.  I saw his little paw prints in the snow.  I stood outside in this weather in the wee hours of the morning and called for my little orange friend: 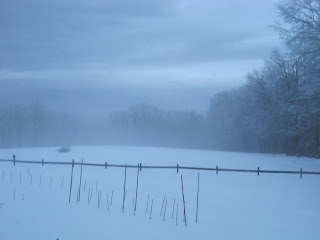 Finally, he just sort of showed up and came in the house.  Why was I worried?  Because we live in the land of fisher cats and the like and they love to kill house cats.  There is also a wolf out there and coyotes.  House cats who go outside eventually don’t come back.  Butter doesn’t quite understand this and the front door, since we’ve had the house weatherized, doesn’t stay shut, unless it’s locked, when a wind blows.  Thought it was locked.  Maia, on the other hand, would never go outside.  She prefers her safe existence inside and this house is pretty huge, so there is plenty of space to run around like a crazy kitten.

Despite the drama, I do have another project to show you. 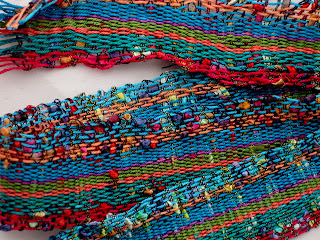 This is my third attempt at warp-faced weaving on the Mirrix.  This, like the last one, uses a silk warp and novelty railroad yarn.  (note:  I found some more of the stuff, since I am just about out, and will post my find and links to where you can purchase it once it arrives.)

I am finishing this with a bead soup in one color instead of using just size 11/0 seed beads.  I will take a finished picture to post tomorrow along with bracelet number two.  You’ll see where I’ve put the small and large bugle beads, which I am loving.