I cut the blue bracelet off the Mirrix the other day, and wanted to try using the shedding device with the next looming. I think that was a little too ambitious for the first try. Before I began, I watched YouTube video on setting up the loom for bead weaving with a shedding device. The warping was easy enough, and is now embedded in my mind. 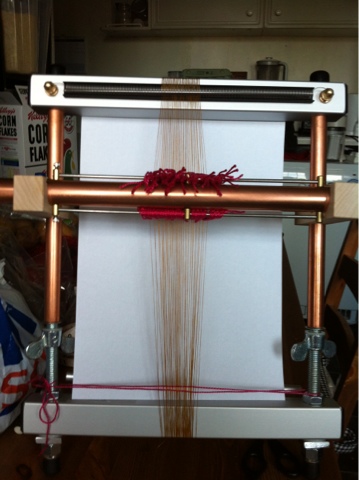 I thought it was all systems go! Unfortunately one of the sheds was not defined. I did follow instructions to place the second lot of heddles to the right of the first lot of heddles, but it wasn’t working! Through sheer frustration, I removed the second lot of heddles and started again. I continued attaching the heddles the next day, and sat back happy. I went to check the sheds and NO!!! It wasn’t working!! I removed all heddles and cut the warps off! I warped for 9 beads wide and stopped for lunch. I read through the sheet that came with the loom, as well as the PDF from the Mirrix site. There was an AHA! moment. I’d rotated the shedding device the wrong way after attaching the first set of heddles! I also used the trick of passing the spring bar through the warps. I set the heddles and when I checked the sheds…THEY WORKED! I worked the first row as in traditional looming, then proceeded with working with the shedding device. I think this needs LOTS and LOTS of practice to get the hang of. It seemed ok with one or two rows before going pear-shaped! 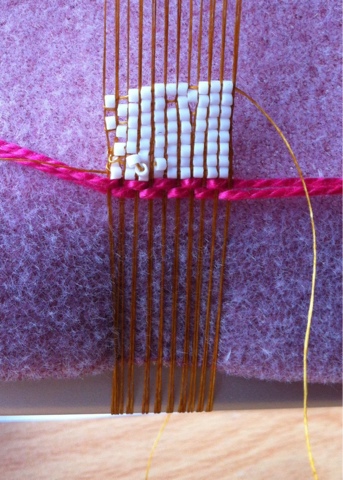 I found it difficult to get the beads between the warps, and then get them to stay put as I pushed them down towards the V formed by the shed. I seem to have misplaced some, as you can see in the photo above. I find it too time consuming and difficult to work with. And the warp threads show more when you use the shedding device – theyre doubled. All this is most likely due to my not doing it properly. I think for next time (yes I like to punish myself), I may use larger beads to get the basics down. In the meantime, there is another bracelet in browns, gold and white, on the loom. Much faster 🙂 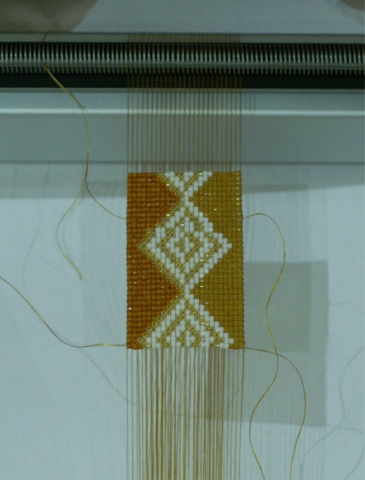